Cave of the Ancients

The Cave of the Ancients is the second dungeon of the additional storyline and it is also the fifteenth overall and penultimate dungeon in the game.

The dungeon´s wireframe layout is reminiscent of the old school dungeon-crawlers, which gives it a very retro feel. Despite having a higher monster warning than the Soldier of the Giant Gods, the Cave of the Ancients is considered easier, or to say at least, less challenging. 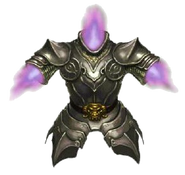 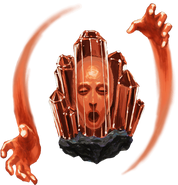 Given by the King, he wants you to go to the Cave of the Ancients and defeat all the Masters, he also wants a beehive, which can be found at B6F.

At B2F, you must walk through the room until you find a pair of woolen shoes. Once you find them, locate a pair of twin guards; give them the shoes so they let you through.

Advance until you meet the Master of Nothing and defeat him.

At B3F, walk until you accidently step on a mirror, then take the mirror to a woman who calls herself the Mother of Love.Move forward until you meet the next master and defeat him.

Note: the Master of Love fights alongside his father, the Father of Love.

Head to B5F after defeating the Master of Beauty , locate the Final Master and defeat him.

In the first floor, at coordinates (x17,y10), there is an old man who asks for a doll and a portrait, or else he will deny access to the party.

The doll can be found in Guatella Grotto, at 2F secret area (x9,y6) and the portrait is located in Soldier of the Giant Gods, at B6F (x9,y7).

At the bottommost floor the party can find an item called Staff of Transformation, which allows you to use enemy portraits for your characters. This can be edited at the Training School.

The Staff of Transformation

The most expensive item!

Got to level up!

The Master of Nothing

The Master of Love